After two years of working at Ergon, all the school I could stand and a break up, I was ready to graduate and get on with my life and out of Vicksburg. I wanted a big-girl job with a big-girl apartment. By myself. I was tired of being controlled by the people around me and I was ready to do something for myself.

By the time March of my senior year rolled around, I had in mind that I would meet that goal by no later than May. May 2011. This would mean I’d basically have a job waiting for me when I graduated complete with a two bedroom apartment and would be living for/with no one but myself. An impossible standard for an art major with barely two years of experience who wanted to leave town/the state.

This standard led to the first of many mental break-downs. When I didn’t meet that goal, I felt like a complete loser. Why had I worked so hard and spent so much money on a degree if it wouldn’t even get me a freaking job?! I kept seeming to forget that I had a job. A great one that was continuing to teach me real-world stuff on a daily basis, which was more than $6,000 a semester had ever taught me. Go figure.

After about two months of feeling like a failure, I talked to Shana my life coach about what my problem was. First, she assured me that it could take a year or even a year and a half for someone to find a job right out of school. And that was when she graduated… I won’t go into how long ago that was. Then, she told me to get my ass to work. Sure, my resume was great, but it needed work. My work needed work. Ugh, here we go again. I needed something in my portfolio that would make me stand out from the pack. So, I got a stiff drink and got to thinking. Again.

A couple of days later, Shana walks skips out of her office with a huge smile on her face. “Why don’t you do a celebrity branding campaign for Poe?!” (Poe is my pet rabbit.) At first I was weary about how that would even begin to work, but as we talked more about it – she could be the Kim Kardashian of bunnies (Kim K is apparently more likeable than Paris – or at least she was before that divorce), rich, famous for being famous (minus sex tape) and all that good stuff. So I think about it (we do a lot of that) and come up with a bio for Poe that I can draw inspiration from. I give Poe a logo that Shana immediately approves. Since I’d never gotten Shana’s immediate approval on anything before, that pumped me up. This could actually be something good!

Okay. Well in order to design a magazine cover for Poe to be caught on the cover of, I needed a name and logo for that magazine. Geez. This seemed like a lot of thinking (my brain is going to think itself to death), but it actually came pretty quickly. Probably because I was still hyped up from getting Poe’s logo perfect on the first try. The magazine would be called the “Nibbler.” Duh!

The magazine design actually took two tries to get right. This was still better than normal. Maybe I was starting to the hang of this design thing… Well, let’s not get ahead of ourselves. The first try looked like a tabloid magazine. I decided I wanted Poe to be classy, so I tried again and used mags like Vogue and Glamour as inspiration. The final product, after a couple of minor changes, turned out great. Poe was on her way to stardom, and I was on my way to doing/thinking/designing things for myself.

This was the first project I really felt proud of. I did a lot of it on my own with minimal direction from anyone else. And I know what you’re thinking, “Um, how was that minimal direction?” Trust me. It was. I took Shana’s advice and ran with it. I interpreted it on my own and she critiqued what I came up with, which were usually minor changes.

When we looked back on this project, we realized how far I’d actually come from where I was when I’d started at Ergon. And it has only gotten better since then. Mental break-down aside, I was glad I’d stayed at Ergon past my goal of May 2011. This project helped develop one of my answers to those questions at interviews about my strong points: ability to take direction well. 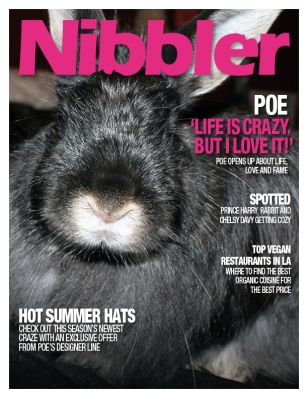