This past weekend I participated in the happiest 5k on the planet.

No, seriously. It was the most fun I’ve ever had exercising. It’s called the Color Run and I recommend everyone do it at least once in their lifetime (it travels to all the big cities so there’s no excuse).

A few months ago, my aunt Leila came up with the idea for a few of us to meet up in Memphis, since it is a good half way point for those that live in Mississippi and for those of us that live in Tennessee. And what could be more fun than meeting up to run 3 miles while getting covered in colored powder? Sounded good to me. Count me in!

So, the week before the race came rolling in and I started to get excited. As did the other three. We had the hotel booked, the white clothes required by the race, and the pre-race documents to keep us focused on anything but work all week long. I was so excited about it that I actually took the time to read the pre-race docs thoroughly beforehand. Those things actually tell you a lot about what’s going on the day of (believe it or not). For example, the race is NOT timed! Wow, they were serious about this having fun thing… So, this is one of those races that serious runners should just take a break and have fun with. They shouldn’t worry about their time, which is futile anyway once you see the kind of crowd 9,000 people can make when they get together in one place. They also send the runners off in waves over the course of an hour so that everyone isn’t running and vying for color all at one time.

It seems like a ton of waiting, and it is, but the race officials were very good at keeping us entertained while we waited. When we gathered at the starting point, there was music playing, people dancing, officials were throwing out free stuff (I caught a Color Run bracelet), we did the wave (which looks awesome when 9,000 people all do it together!), and of course there was also some great people watching to be done while waiting. People dressed up in all kinds of stuff for this race. There were men in wigs and tutus, people wearing joker hats with bells on them, knee high socks, and plenty of ‘Color This’ written on people’s butts (bought, I’m sure, from the official Color Run store).

Anyway, once our turn came around to run, my mom took off. She gets excited. And my aunt came running after her, grabbed her shorts, and told her to slow down. We wanted to walk together so we didn’t get separated (phones weren’t super reliable with all the people around). So we walked the Color Run. But it was still fun because we hit four different color stations and had to slow down at each one of them in order to get sprayed with powder. And you want to get sprayed. If you aren’t a horse of a different color at the end of the race, people look at you funny. So we made sure to get as much as we could at each place.

By the end of the race, we were all different kinds of colors and were just hoping it would wash off in the shower. We had to get to church that night! 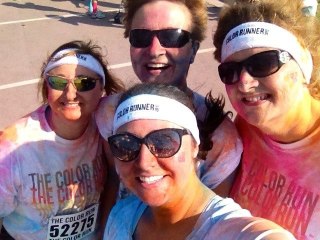 Well, the powder does not wash off that easily. Each of us spent much more time in the shower than we were used to and we still found places we missed. It reminded my aunt of the toothpaste she used to use that turned your teeth blue in places you didn’t brush well. We all found the places we didn’t wash well. Mine is apparently my neck. I had a blue neck for two days and had to wear my hair down and a collared shirt.

There was also color in places we never expected to find it. My aunt Leila’s toes were all blue. Aunt Carla’s belly button was blue. My chest underneath my shirt was orange. It was gross but so worth it.

We also found out that the tattoos we put on our faces didn’t wash off very well and had to spend the rest of the day with ‘The Color Run’ printed on our cheeks. Normal, right?!