I met a guy out one night that seemed pretty normal. However, as we started talking over text yesterday, he basically invited himself over. The conversation began with him asking me to hang out again “someday.” Well, yeah, when we can plan something in ADVANCE, sure I’d be totally fine with that! Then he said he’d ask off a day of work. Weird. I told him not to do that and we’d just pick the next time he had off and was free. His response to that text was “Aleluyah! I just asked off work tonight. I love my boss. So we are meeting tonight at 7pm :)”

Um…he didn’t even ask me if I was free and this was at, like, 10:30am, but I said okay because I didn’t have much planned for the night except for the gym and cleaning (on my own time) for Friday night but I guess that could be postponed. Hopefully I could run home and clean up everything in an hour and a half (with a health coach call in between!) even though I didn’t feel like it.  Anyway, he asked where I lived, like, 5 hours before he was supposed to come over, which I thought was weird but didn’t think much more of it, so I (stupidly) told him.

As the day went on, I still couldn’t wrap my head around the fact that he was coming over. I had this awesome night of doing nothing planned. I was getting stressed out just thinking about everything I had to do before he came over.

So, I told him I didn’t want to hang out. I even told him why (as dumb as it might sound to someone else)! I was honest and I also said I wasn’t comfortable having basically a stranger in my apartment. Should’ve been enough for him to GO AWAY. But it wasn’t. He called me (I really don’t like talking on the phone) and told me how he’d never had a Valentine (who still says that/cares??) before and just wanted to surprise me. Ugh! Not my problem! And I could care less about Valentine’s day, so this made him seem quite pathetic to me. So, I told him I was sorry but I just didn’t want to hang out tonight. I thought I was very nice about it and if he’d let it go then, he could’ve saved himself and I would’ve given him another chance to hang out (his next day off was Tuesday, what’s so bad about waiting til Tuesday?!). So, we hung up. My night was back to being wide open. Just how I wanted it. Problem solved!

However, around 7pm, the guest gate calls and, since I’m not expecting anyone, I don’t answer it. At first I was confused, but then a sneaking suspicion came around that it could be him. I jumped up and locked my door – it being unlocked alone made me anxious because I usually lock it as soon as I walk in.

Less than 60 seconds later, he was knocking and saying my name through the door!!!
I didn’t answer because:
A. WTF??
B. I had JUST told him NOT to come over.
C. My apartment was still a mess!
D. WTF??!!
And thank the good Lord above I’d thought to lock the door because after he knocked and didn’t receive an answer, he proceeded to turn the knob. He tried to OPEN THE DOOR. Jesus Christ, this guy creeped me out.

I then realized my phone was on and he might hear it through the door. Literally half a second after I put it on vibrate, he called. He called me twice and left TWO voicemails asking me to come outside and take a flower he got me. No thanks.

I hid in my apartment until about an hour after he left and then sent him a text asking WTF he was doing at my apartment when I told him not to come over. He said he didn’t want to be alone on VD and that when he makes plans he sticks to them. Then proceeded to say, “I saved my day.” WTF? He may have saved his day, but he ruined mine!! I told him I was totally creeped out by that and that I didn’t want to talk to him anymore. He told me he was just ‘passing through’ and wanted to give me something (he rides a bike – one does not just “pass through” on a bike), then he compared himself to a delivery person and said I wouldn’t be creeped out by that. I told him a delivery person hadn’t been told to stay away and doesn’t literally have to break in to my apartment complex to deliver something because delivery people are WELCOME. 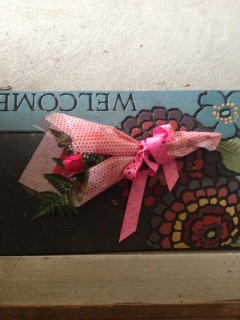 He basically told me I was over-reacting and that he’s a good person (why would a psycho admit he’s a psycho?).

I felt like he was probably sitting outside my apartment waiting for me to open the door (and told him that as well). But once I was sure he was gone, I went to the gym and tossed that stupid flower.

THEN, around 9:30, the gate called me AGAIN! I didn’t answer and quickly turned off all the lights and made sure the door was locked.  Then I went to hide in my bed while contemplating calling the police. But no one ever knocked on my door and there was nothing on my doorstep this morning. (None of the decapitated heads I was expecting.)

Maybe someone was just calling the wrong number from the gate, but that seemed like too much of a coincidence to me.

NEVER AGAIN will I tell someone I’ve just met where I live. NEVER AGAIN. I can’t wait to move.