The title says it all! (Yay!) My new house is a two bed/two and a half bath townhome on the Raintree golf course. The course is in my backyard, which sounds great in theory, but until I get real curtains hung up, all those golfers can see all up in my space.

You may also remember from one of my more recent posts that this had kind of been put on hold indefinitely. But I had one conversation with my friend, who would eventually become my realtor, and the rest is history!

I won’t got into too much detail on the process, but it was… painful. Not applying for the loan, or even closing itself. I had wonderful people on my side that made all of that go seamlessly. However, the seller was not a nice man, and I’m thankful I did not have to deal with him directly. His listing agent was afraid of him, which did not work in our favor. However, from what I heard about him, I don’t blame her. I will say that my realtor has mutual friends with the sellers (a couple), and they told us that the sellers hired a contractor to update all the appliances in the house, put a fresh coat of paint on the walls, and fix a few things. It totaled $8,000 and the seller never paid the guy. In fact, the mutual friends were at the house when all of this went down, and the seller apparently reamed the contractor out. The things he said made the friends so uncomfortable that they had to leave. So, there’s an idea of who we were dealing with. It just got worse from there.

He also decided at the last minute not to come to the closing, which I was thankful for. I found out later that my realtor actually told him to cancel his tickets to Charlotte (he lives out of the country) because she had to threaten to pull out if he didn’t do what he said he was going to do as far as our contract went. Apparently I came closer to being homeless than I’m comfortable admitting.

The closing date was delayed a day (much to the dismay of my nerves) because the seller decided not to come, and after hearing what the closing attorney had to go through the morning of the actual closing day, I am shocked it happened the day it did. The poor woman’s hands were shaking as she handed me paper after paper to sign. She’d been running around all morning (in addition to having to go to a funeral) trying to fix the mistakes the seller had made. Since he lived out of the country, there were extra steps he had to take and did not. She did a great job taking care of it which allowed things go smoothly on my end. And, thank God, because I’d been on the verge of tears and having almost constant heart palpitations for about a week from stress, and I’m not sure my heart could take another setback. I loved her and will always recommend her.

We were all glad to leave that office on January 31st. My realtor and I went out that night and drank two bottles of well-deserved wine.

Anyway, I’ve been “moved in” for a little over a week now. I say “moved in” because, technically, everything is out of my old apartment, but there are still boxes to unpack––most of which have been stacked in my second bedroom that I will eventually get to.

My parents were great enough to come up to Charlotte for an entire week to help me get moved in. My mom did a wonderful job getting my old place cleaned out while I was at work, and my stepdad made multiple trips to Lowes for me, changed out old light fixtures, hung curtain rods, re-wired my dryer when my 4-prong plug wouldn’t fit into the 3-prong plug at the house (that was built in 1991), and entertained Warren basically all day.

While they were in town, I gave them my bed to sleep in and I slept on an air mattress for a couple of nights until my couch came in. Now, don’t get me wrong, I loved having them in town, but it didn’t feel “real” until they’d left and I was able to sleep in my own room in my own bed. In my own house (still feels weird to say!). So after about 6 nights, it finally sunk in. But I was still too tired to let myself become overwhelmed by it all.

That came later. When I realized all my help was gone and there was still a long list of things to get done. Namely, hanging the curtains that had come in the mail this past week and my kitchen cabinets. My wonderful parents and a couple of friends had helped me get the cabinets started, but it was up to me to get them finished. And make them look good. I am still knee deep in that process. I was able to put a second coat on them on Sunday which took hours. Thankfully, opening the back and front doors and blocking them off was enough to keep W contained and entertained for the most part while I did the cabinets themselves (the doors are hanging out in the second bedroom with the cat––who better keep his dirty paws off them!). W is not a huge fan of being locked out of a room that I am in, and he has a very high pitched bark at the moment that I am hoping will go away when he hits his “teenage” phase. (Don’t boy dogs’ voices change like boy humans??) 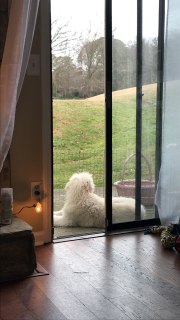 Sometime during, before or after this process (it’s all running together at the moment), I took on the task of hanging up the curtains on my exterior back door (that will soon be replaced because, as you’ll see in the picture, it did NOT pass inspection). In fact, it looks downright gross, and I’m going to cover it up with curtains until I can get some new doors installed. Anyway, this process was quite frustrating. I bought a double rod so that I could hang a sheer panel and a more opaque panel in front because I really just like the way it looks. My stepdad was kind enough to install the rod before he left, but I wanted long curtains. So I ordered two 90” sheer panels and two 90” opaque panels. I washed the sheer panels first and hung them to dry. When they were dry I used them to measure the height of the rod (it needed to be re-hung higher on the wall) and moved the rod up. Meanwhile, W decided to chew on the rods I had taken off the wall in order to put the brackets in the right place and totally destroyed one end of one of the rods (I let him chew on them because I thought the rods were metal and that he wouldn’t be able to do much damage––wrong!). And after the frustration of getting screws out of the wall and back in, I just decided to cover it up with Sharpie and put that thing back on the wall. #OverIt

The sheers looked really good when I hung them up! They touched the floor just the way I wanted them to. All that was left was to hang the opaque panels… that were TOO SHORT. ($#@&$^@!!!!!) By at least an inch!! (Though I thought it looked like more, but when I measured them, they came in at 89″.) So, what the hell was I supposed to do? Re-RE-position the brackets and curtain rods? But then the sheer panels would drag the floor! Damnit, Overstock! And I’d already washed them! Would they even take them back?! I got about a third of the way into re-re-positioning the brackets (a little lower) before I decided I wasn’t going to go through the unscrewing, screwing, leveling and screwing some more all over again. I screwed the bracket I’d taken back off the wall right back into the spot it needed to be for the sheer panels and decided to call overstock Monday morning and just see what they’d say. I figured since I’d washed them, they wouldn’t take them back. But I knew I’d washed both the curtains in a cold, gentle cycle and the sheers were still a perfect 90” (I measured them both), so I was prepared should they start asking questions.

After the curtain-hanging, the painting, the putting together of dining room chairs, the spray-painting of a basket I am up cycling, and the meal-prepping, I decided it was time for a break. It was also about 8pm, so if I was going to make it out of bed by 5:30 the next morning, I didn’t have much choice but to come to a stopping point and chill for a minute before bed. I got a glass of wine and decided to sit down and enjoy the work I did get done.

And once Warren got some food in him and the cat decided to go back upstairs to his hiding place (he is slowly coming around), he settled down on the back patio to enjoy the cool weather and I settled on the couch to catch up on This Is Us.

Let me tell you, nothing is more terrifying than spending a peaceful night alone in your first house, sipping on some wine, and trying to stop the constant tear flow that is just mandatory during This Is Us only to have that interrupted by the dog jumping up and running, seemingly terrified, back into the house when it is pitch black outside. I immediately jumped up too because my door was wide open and whatever was out there could NOT have been good! But then I noticed the wind was blowing, and I had hung a tarp (read: shower curtain) to dry on the barrier I’d used to keep W contained. The wind blew it and scared him.

At least, that’s what I’m telling myself. But I closed and locked the door anyway, and we decided to call it a night and went upstairs to get ready for bed.

I’m just in a constant state of exhaustion these days and that was enough for one day.

P.S. Turns out, overstock.com’s customer service is wonderful, and they offered to send me replacement panels immediately. And, while I was going to try a different brand (because clearly this one doesn’t know what 90 inches means), I took them up on it. I fully plan on sending those back if they do the same thing.