I have a pretty bad habit of leaving doors open/unlocked and forgetting about them. I’m not really sure why, or if this is even a problem for anyone but me. It probably has a little to do with my parents always taking care of it when I was growing up and me never really having to think about it. But now that I am out of the house, and out of excuses for being a grown-ass woman and still forgetting this very important life detail, I’ve had a hard time developing the habit. It’s been pretty bad/scary in the past. I’ve left my key in the outside door knob all night (on multiple occasions). I’ve also left my 3rd floor balcony door open all night and day (also on multiple occasions). And there was also that time when I’d just gone off to Mississippi State for college and left my car running with the door open in a parking lot. I’d met some friends at their dorm, and they picked me up straight from my car (where no one else noticed I’d left it open and running, either) and drove off without another thought. This little incident not only got me called up to campus security later that night (kudos to Mississippi State’s RAs and security for noticing) to make sure I was alive, but it also got a Facebook group named after me (back when Facebook groups were a thing). It took a while to live that one down.

However, I have acknowledged that it’s a problem and have tried to make a conscious effort in locking up the house at night and turning it into a whole process mentally and physically, so that I will stop forgetting to do it. Thank the Lord I have always lived in safe neighborhoods.

When I moved into this house, I thought eventually Gray could become an indoor/outdoor cat because he always seemed to love sitting in the windows of our old apartment and watching the birds. I always thought he might like the little bit of nostalgia going outside could afford him, since that’s where I found him when he was a kitten. I knew we could get there eventually, but it would take some time before I was comfortable letting him go out unsupervised.

When the weather is nice, I like to leave the front and back doors open, as, I’m sure, a lot of people do. And for about a week or so now, when the doors have been open, Gray has been getting brave and venturing out onto the back patio for short periods of (mom-approved) time. I thought nothing of it since the farthest he’d gone wasn’t even to the edge of the patio before he’d get nervous and come back inside. Not a big deal. We still had a ways to go before he’d be willing to go farther.

This past Saturday night was a really nice weather night, so, as usual, I opened the patio door as I was ironing and hanging the curtains I’d washed and had left to dry earlier in the day. When I got the curtains hung, I left the door open but the curtains closed while I sat down to enjoy my work for a little while and promptly forgot that the door was open. (It’s ok, you can roll your eyes now.)

Anyway, after about an hour, I decided to get up and go to bed. And, even though I totally thought the back door was closed, since I was trying this new make-locking-up-at-night-a-process thing, I checked the door behind the curtains to make sure I’d locked it. Imagine my surprise when I found it wide open. It scared me a little bit, and I closed and locked it immediately, thankful for starting this process and making a mental note to really make this a habit. Then I went to bed.

I had to get up fairly early the next morning since I’d booked an overnight trip to the high country that night and was planning on leaving around 11:30 that morning. I noticed Gray hadn’t come to sit on my bed and figured he’d decided to sleep in. Usually, he is hopping onto my bed every morning as soon as he hears my alarm go off. He sits and waits for me to open my eyes, and when I do, I’d better either get up to feed him or pet him because if I don’t, that’s his cue to start making circles on my hair until I do. However, every now and then, he decides he’s too busy to do that, and I almost enjoyed the peace that morning (which, of course, I felt super guilty for later). But when I went to feed him, I couldn’t find him anywhere. I called and called for him using our not-so-secret safe word, “hungry” that he always responds to. He doesn’t answer to his name, but he always answers to “Are you hungry?” No kitty.

As I was tearing through the house and not able to find him, the realization slowly started to dawn on me.

What if I’d locked him out last night? My stomach sank. Oh God.

I ran to the back door refusing to believe I could’ve been so negligent and hoping he’d still be there. Of course, he wasn’t, and I was officially a terrible mom. I went outside and called and called for him. I took wet food with me in case he could smell it, I shook dry food around in a bowl and asked no one in particular if they were “hungry.” No answer. And, of course, I had to get ready to leave. I couldn’t cancel the trip now! So, I put his litter box, a bowl of water and food on the back porch behind the barrier I had up to keep the dog inside (which Gray had to have jumped over in order to have left the premises) and forced myself to leave. I still refused to believe he was actually gone. I texted my neighbor on my way out and asked her to keep an eye out for him. She said she would. I knew even if she saw him, she wouldn’t be able to catch him, but it would give me peace of mind to know he hadn’t gone far.

Night 2 came and went with no sign of Gray. When I got home Monday night, I started entering panic mode. I called outside and looked for him as much as I could and tried not to cry (I waited until I got inside to do that). I posted on Next Door to see if anyone had seen him and to let me know if they did. I got tons of suggestions on what to do to get him back home ranging anywhere from just calling for him to setting a humane trap to catch him. One lady even went so far as to have me call her phone to tell me what I needed to do. This was getting overwhelming.

One of her suggestions was to wait until the middle of the night when it was quiet, take an open can of wet food with me (I was one step ahead of her), and call for him because he could be too scared to come out even if he could hear me calling for him. And, after I got off the phone with her, I went around again with the wet food but got nothing. And by then it was time for me to go to bed. I get up at 4:55am on weekdays, so I figured that would be close enough to the middle of the night and would look for him again then. I was exhausted from the day and couldn’t bring myself to stay up all night and look/call for him. I just didn’t want to believe it had gotten to that point. I also had to be a functioning adult the next day. I couldn’t be sad and sleep deprived. So I put the can of wet food outside next to his water bowl and litter box and went to bed.

The next morning, I noticed that it looked like some of the wet food was gone. It seemed like he’d tried to eat it through the barrier instead of walking around to the opening I’d left for him to get back in on the other side. This gave me a little bit of hope, so I took the can, put the dog on his leash and we went around to the bushes I thought he may be hiding in (towards the front of my house) and called again for him. A little louder since I thought most people would be asleep (and not judging me for losing my cat already). And, since it was so quiet, I thought I’d be able to hear him. He always answers when I ask him if he’s hungry.

I called and called while Warren sniffed around and wondered when I was going to give him that can of food I was holding. And after a few minutes of more nothing, I decided to go inside because I had to get ready for work. I was already going to be late as it was.

As I shut the door and was heading to get Warren’s food, I heard a faint meow outside. I froze. I couldn’t tell if it was coming from the back or the front and it was too dark out back to tell (I’d left the curtains open in case he came close enough to the door for me to see him). And I knew if I screwed it up and opened the wrong door, he might bolt back to his hiding spot. I took a chance and opened the front door, and there he was!! He came right on in despite Warren at the ready to tackle/greet him as soon as he saw fit, but I didn’t give him the chance. I picked Gray up (he protested a little bit, but didn’t claw my eyes out, so I took that as a good sign) and gave him a hero’s welcome home complete with food, water, separation from the dog (who was more interested in his food than the cat once that was an option) and lots of scratches.

And I can breathe again!

I hope we have all learned a lesson (I know I have), but I mostly hope Gray has lost all interest in going outside. Although I do plan on getting a higher barrier for the back porch, he is still a cat, and if he really wants to go outside, I won’t be able to stop him. Time will tell. 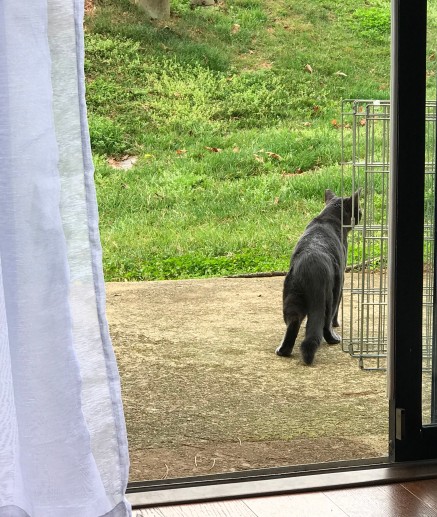 P.S. I got a notification the day after I posted on Next Door that my post was trending. The crazy cat lady community is a strong one, and I’m grateful for them!